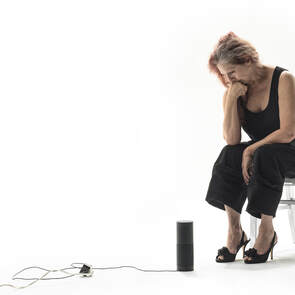 
​​The NOSTOS FESTIVAL commissioned this new work from corningworks noting our “sardonic and mature takes on humanity”-- specifically to explore the festival's chosen science and arts theme: AI & Humanity.

With wry humor, and a seasoned poignant point of view, this interdisciplinary dance theater work will explore "basic" needs of humanity, and how “Artificial Intelligence” either meets, or fails to meet, these rudimentary needs. 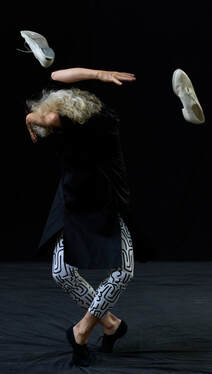 An evening for two, THE OTHER SHOE is a mix of unflinching monologues, intertwined with choreography and a seasoned dry wit — an acute, bold, and outspoken commentary on our country’s current moment in time.  A paired response to the perplexing present, as well as to what the future might hold.  A cavalcade of conflicting contemporary consciousness, metaphorically performed in black and white.

“I am sitting here with a mic
and some papers
so I look like I have something to say
and know what I’m talking about . . .”

​ and so the ride begins.

Along with Corning’s own choreography, she invited four guest choreographers to each contribute a solo for her to perform as part of the production, which are woven into the full-evening work.  These four commissioned solos have been created by some of the dance field’s leading choreographers: Donald Byrd, Martha Clarke Li Chaio-Ping, and Max Stone, who were only given the title of the show THE OTHER SHOE to inspire the solo.  Each of the 4 artists responded from their own perspective, their own place in the world, their own physical language—offering a coterie of diverse voices, representing different genders, races, and life experiences.  This diverse chorus of mature voices, intricately woven into the work, offers a poignantly textured and uncompromisingly provocative human commentary on these monumental times.

the other shoe... is made possible in part with support from:  Allegheny Regional Asset District (ARAD), CORNINGWORKS Board of Directors, The Heinz Endowments, Individual Donors, Opportunity Fund, The Pittsburgh Foundation, PA Council on the Arts, Port Authority of Allegheny County, WYEP & WESA
January 18 - 30, 2022
original premiere date March 2020. postponed due to Covid 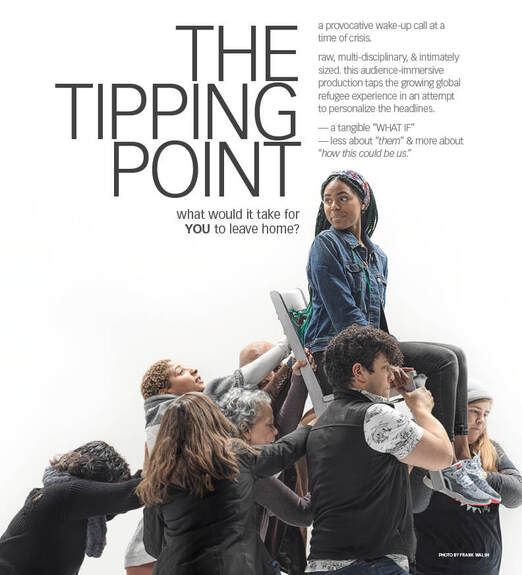 25 Carrick Avenue, Pittsburgh, PA, 15210
(FORMER BIRMINGHAM UNITED CHURCH OF CHRIST)
Days from opening in March 2020, corningworks had to shut down due to COVID. The most pivotal work of Corning’s 40-year career, became, due to the pandemic, what co-director Gab Cody noted was “the most amazing workshopping opportunity”.

Given the United States’ past year of experiencing tangible social distancing, civil unrest, unprecedented politics, and loss of lives, the new version resonates beyond its initial conceptual prompt of  —  “WHAT IF”  — to   — “WHAT NOW?!”


Borne from Corning’s intensive 3-year mentorship with a Kurdish refugee family from Syria, combined with her DEEP concern for the future of our country, and the world in general, she has created this complex, interdisciplinary work in an artistic collaboration with the renowned, international humanitarian medical organization, Doctors Without Borders/Médecins Sans Frontières.

Corning sites this work as “potentially one of the most layered and comprehensive works I’ve created in my 40-year career, a way to address my fears for the future … a response to the numbness from media over saturation, climate change, the effects of societal polarization, political fall out . . . that we are living out the ‘boiling frog fable’ —  if a frog is put in tepid water which is then brought to a boil slowly, it will not perceive the danger and will be cooked to death.”   She keeps asking herself, “What will it take to take action?”

A visceral, sensory, provocative, immersive, shared experience that uplifts human consciousness, an emotional response; a wake-up call to the numbing onslaught of changes in the world around us.

Created for intimate groups of 20 per time slot (with two time slots per evening), the work plays throughout the two floors of 25 CARRICK, a new & unique Center for the Arts (located at the former Birmingham United Church of Christ in Pittsburgh’s South Hilltop community of Carrick).
THE TIPPING POINT ... is made possible in part with support from:  Allegheny Regional Asset District (ARAD), two Anonymous Donors, The Benter Foundation, CORNINGWORKS Board of Directors, The Fine Foundation, The Heinz Endowments, Individual Donors, Opportunity Fund, The Pittsburgh Foundation, PA Council on the Arts, PNC Charitable Trust, Port Authority of Allegheny County, WYEP & WESA
March 23 - 27, 2022
The New Hazlett Theater

A reimagined 1995 work Corning created on her “younger” company of dancers (corning dances & company) in the aftermath of OJ Simpson’s “not guilty” verdict.

Now 26 years later, the world STILL hasn’t adequately addressed domestic abuse of women or the relegating of women to second class standing. Despite the recent #METOO movement, newly elected female politicians, the daily micro, and not so micro, aggressions continue.

Corning upends this multi-disciplinary production for the GLUE FACTORY PROJECTS' more “seasoned” artists -   with a keener, more urgent mature perspective — NOT looking back, but looking forward - but questioning - how much further have we come . . .  really?