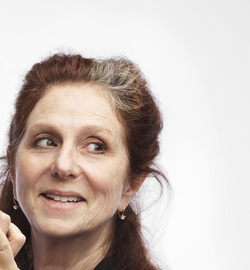 In addition to years of studio dance classes with Master modern and ballet teachers including among others, José Limón, Charles Weidman, Ethel Butler, Ernestine Stodelle, Jens Graff, Charles Mudry, and Christopher Flynn, Corning holds a BFA with Distinction from the University of Michigan’s Department of Dance and an MA in Dance from The Ohio State University.

From 1981 – 83 Corning toured a solo repertory concert in the US and Europe called second take. In 1981 she began corning dances & company in Stockholm, Sweden where she attracted major artists, including members of The Cullberg Company and in 1986 continued its success in the US, including 3 critically acclaimed seasons in New York City, and from 1993 – 2003, in Minneapolis, Minnesota. In the Fall of 2003 she became the artistic executive director of Pittsburgh's premiere modern repertory company Dance Alloy which she ran successfully through 2009.  In 2009 she returned to creating her own work under the umbrella of CORNINGWORKS, based in Pittsburgh, PA this is a dance theater company focused on her award winning series THE GLUE FACTORY PROJECTS - original full evening length dance theater works created on nationally & internationally recognized performers over the age of 45

Corning has created and produced over 60 works, including 16 full evening productions. Her work has been commissioned by national and international companies such as Utah Repertory Dance Theater, Pennsylvania Dance Theater, Eugene Ballet Company, Groundwork’s Dancetheater, and Nye Carte Blanche in Norway, among others. Most recently in August 2021, she was commissioned to create and perform a work by the SNF Foundation/ Nostos Festival in Athens Greece.

In 1994 she was invited to return to Sweden to choreograph the feature-length film production of Stravinsky’s “The Rake’s Progress.” Directed by the award-winning director Inger Åby, conducted by Esa Pekka Salonen, it won the Prix d’Italia in 1995 and aired stateside on PBS in 1996.

In 2000, she created THE GLUE FACTORY PROJECT — an annual full evening production created on internationally and nationally renowned performers over the age of 40.

Her work has been recognized by international and national grants, including four Artist Fellowships from the Minnesota State Arts Board, three McKnight Choreographer’s Fellowships, a NY Foundation for the Arts Choreographer’s Award, and an Individual Creative Artist Fellowship in Choreography by the Pennsylvania Council for the Arts.  She was twice invited to Robert Redford’s dance film/video lab at Sundance Institute. Her work has been the subject matter of two TV documentaries, for Swedish National TV and for Iowa Public TV.

She is recognized as a Master Teacher and has served on the faculty and as guest artist lecturer in major dance programs, conservatories, and universities here and abroad, including France, England and Scandinavia, and as guest company teacher for Bill T. Jones/Arnie Zane, the Royal Norwegian Ballet Company and Utah Repertory Dance Theatre, among others.

In the fall of 2003 she was named the new Artistic/Executive Director of Pittsburgh’s premiere modern dance company Dance Alloy. During her six-year tenure she restored the company to its national status, changing the name to Dance Alloy Theater (DAT) to better reflect the genre of her programming and mission. She created numerous new initiatives that became DAT traditions, including the award-winning BEHIND THE CURTAIN SERIES, The CUPCAKE INTERMISSION, PAY WHAT YOU CAN ADMISSION, ALLOY ON ALLOY, and moderated student matinees. The Pittsburgh Post-Gazette cited Corning as one of their TOP 50 CREATIVE FORCES IN PITTSBURGH, noting“ she brought with her a certain edge that had been missing on the local dance scene…”  In 2007 she was a New Hazlett Theatre honoree for “Women in the Arts: Founders, Pioneers, Instigators”. In total, she presented eleven critically acclaimed seasons which included works by thirteen nationally and internationally acclaimed choreographers, resulting in eighteen world premiers, (ten of which were hers) eight Pittsburgh premiers, and one USA premier. Three of these performances were seminal signature works; Jóse Limón's THE MOORS PAVANE, Victoria Marks’ DANCING TO MUSIC and Susan Marshall's ARMS, at the time making DAT the only professional modern dance company in the world with the rights to these works. Financially she stabilized the company, eliminating a long running debt, tripling the income and running the company in the black for her last three years.

In the Fall of 2009 she launched CORNINGWORKS, a vehicle for her series THE GLUE FACTORY PROJECTS and groundbreaking performances of collaborative dancetheater works created by Corning in conjunction with other creative performing artists.