a cup of water(working title)

Corning's socially aware work explores and delves into the ongoing questions of survival in an apocalyptic world.  With sardonic insight, biting humor, and baring human pathos, Corning and her seasoned group of collaborators/performers launch themselves, and their audiences, onto a marooned desert island . .
"Water, water, every where
Nor any drop to drink."
​                          (from RIMES OF AN ANCIENT MARINER) 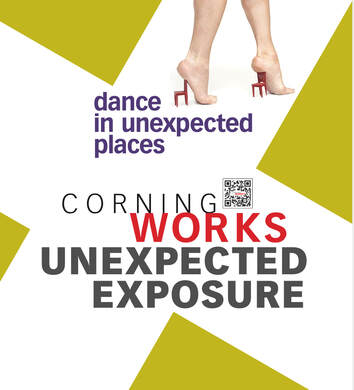 a new series' been launched ...

​UNEXPECTED EXPOSURE
​Performed free of charge for audiences
​Taking CW performances to the sidewalks, fountains, museums, at a non-dance event . . . and other surprising site-specific venues, we are knocking down doors of exclusion. This new series is comprised of several short portable, dancetheater works, with a “pop-up sensibility,” ​performed in unexpected places -
Opening up the experience of CW's socially conscious dancetheater works to those who would not ordinarily attend an “in-theater” production.  Expanding the path to mutual accessibility, while actively countering these traumatic times of isolation and division. VIEWING OF THIS WORK WAS FREE TO THE PUBLIC
This moving 10-minute work was repeatedly performed as part of a special event hosted by The Children's Museum and Carnegie Science Museum for THE ASSOCIATION OF SCIENCE & TECHNOLOGY CENTERS​  a 3-day conference being held in Pittsburgh
ONSITE REHEARSALS were open to any and all passersby — museum-goers, office workers, those taking a lunch break, Northside neighbors, and all those community kids camps who visit the fountain daily
MEET THE PERFORMERS for the cloud of un knowing

THEO BLISS ​is a movement & improvisational artist. They are a resident artist at The Space Upstairs and a current company member of The Pillow Project where they have been featured in the full length-works (in person) and UNDERSTARS, as well as being a regular improvisationalist at Second Saturdays. Theo recently presented an original solo multimedia work "I, um, well..." at PearlArt's Charrette Series at The Kelly Strayhorn's Alloy Studios and is currently developing a feature-length work. Most recently, they studied at Springboard Dans Montréal, performing in a work by Juliano Nuñes. They also attended Point Park University's Conservatory of Performing Arts with a concentration in Modern Dance, performing in works by Jason McDole, Pearlann Porter, Penny Saunders, Jessica Lang, and Bob Fosse.

WEYLIN GOMEZ attended Point Park University for dance, and holds certifications pertaining to injury prevention and corrective exercise. After leaving the university he went on to dance with companies such as, Diavolo (Architecture in Motion), The Pillow Project, and Afro Yaqui Music Collective. He has choreographed multiple works in the Pittsburgh area, and is currently collaborating with The Grey Space Project. Weylin also runs a business that focuses on injury prevention and career longevity for dancers. https://embodhiment.com

​LIBBIE LOUIS is a professional freelance mover and creator. She recently completed her BFA degree with a major in dance at Point Park University, and is currently a company member of Pearlann Porter’s The Pillow Project. Libbie worked and performed with CORNINGWORKS production of THE TIPPING POINT in January 2022. 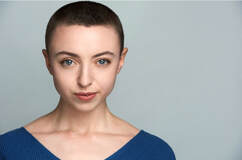 AMY YATTA is a recent BFA in Dance graduate of Point Park University Department with a Musical Theater minor, graduating Summa Cum Laude. Throughout her training at both The Grier School and Point Park University she had the opportunity to work with many choreographers including Peter Chu, Tyce Diorio, Melissa Rector, Darrell Grand Moultrie, Rob Priore, Pearlann Porter, among others. When the pandemic swept the nation and lockdown commenced in the middle of her sophomore year, despite all of the hardships remote learning presented, numerous supplemental film projects and creative assignments led her to discover a love for choreography.  She has now produced numerous dance theater works around Pittsburgh,  solo creations & collaborations with her fiancé, Weylin Gomez; most recently at the SPINNING PLATE GALLERY, and the SPACE UPSTAIRS as part of THE SWITCH - a performance evening of works by new choreographers. amyyatta.wixsite.com/artist or @the_grey_space_project on Instagram and Facebook.


​
just a few of the many reviews received ...
Expertly crafted with sage performances ... CORNINGWORKS’ most unabashed political dance...a success and one whose imprint on audiences was surely felt."
— Steve Sucato  ARTS AIR / The Other Shoe

"... moments of confusion, anxiety, and discomfort. And it’s brilliant..."
— Lisa Cunningham  CITY PAPER / The Other Shoe

"Corning appears to be on a roll. . . I was fascinated once again by Corning’s daring imagination. Call it Beth in Wonderland…another tale of her own making."
— Jane Vranish DANCE CURRENTS / Happily Ever After

If you’re looking for a show that presents a Platonic singular Truth, this is not the show for you. This show is nuanced in hyper-textuality and layered in multiplicity. Not in a post-truth conspiratorial way but in the sense that each scene is so rhetorical and ripe for interpretation that I could see it each night and experience it differently...“Experience” is simply the best word I can use capture this performance. "
​ — Jessica Neu. ON STAGE / Happily Ever After

"... the gravity of this visceral and thought-provoking work was most effectively driven home ...the journey of understanding contained within the work is one that globally needs to be taken for the sake of all humanity." — Steve Sucato  ARTS AIR / The Tipping Point

"Local theater groups have picked up successfully on the trend,(of site specific/immersive works) including Quantum Theater and Bricolage. But no one took the arduous path that Corning and her artistic comrades assembled...This was immersion like no other. Corning always had a vast dramatic vision, executed in minute details, making for a rich, thoughtful  experience at all her performances."
— Jane Vranish DANCE CURRENTS  / The Tipping Point